As good food nourishes the body, sacred space nourishes the spirit. The well-being of both body and soul is essential for a life of well-doing. Being and doing are twin components of a fulfilling life. A well-conditioned athlete who never engages in sport seems as ludicrous as a competitor who never trains. Likewise, one’s cultivating of spirit finds fulfillment in practical service. Lofty thoughts without good deeds are as ineffective as good deeds without pure motives. Once an angry young man was preparing to attend a peace march. “Stay home,” advised Ram Dass. “Your anger will only cause more war.” Pure water can only flow through a pure channel. Subjective faith complemented by the sacred space of collective devotion fosters commUNITY; however, subjective faith complemented by cooperative action transforms community. Sacred space is the bedrock of social drama.

Social drama addresses a practical need of a local community and, in a spirit of service and cooperation, addresses that issue in a unifying and entertaining manner.

“Be anxiously concerned with the needs of the
age ye live in, and center your deliberations
on its exigencies and requirements.” 1
— Bahá’u’lláh

Whereas one individual may be the impetus for creating sacred space for group devotions, a group process is the impetus for social drama. The art of consultation becomes the primary dynamic for “deliberations”. In a world in which disagreement is usually disagreeable, and conflict in conversation easily becomes confrontation, the art of Bahá’í consultation provides a sacred space for frank and free-flowing discussion. The facilitating chairperson ensures that all participants have opportunity to express their feelings, as well as their ideas. Since all speak to issues, not to personalities, and all listen actively without interrupting, a safe environment is created.

Oftentimes, a group is composed of both visiting and local participants. The local people know their community and its needs better than outsiders. They are key to the group’s understanding not only the particular social needs of the community, but also its prevailing beliefs, customs, and concerns. For social drama must be suited to both the needs and sensibilities of a particular audience. Sometimes an outsider can make assumptions that prove false. While living in Ma’alot-Tarshiha, Israel, I once made mention of Abraham and Isaac to some Israeli youths. In response I received silence and blank looks. “You know, the Jewish patriarch Abraham,” I explained, “who was asked by God to slay his son Isaac?” The Israeli youths shook their heads. They had no clue. I had assumed they would be familiar with a principal story from their Torah. But in a modern world alienated from a common mythology, local legends often have more resonance than religious myths. Of the plays I wrote in Spanish in the Andes [see PERU link] The Return of the Baby Snatcher had more of an impact in Catholic Peru than The Prodigal Son. Both plays dealt with pressing social problems: the first with the high incidence of infant mortality due to dehydration; the second, with village youths’ abandonment of family farms for work in the capital city. However, the local legend of a mysterious Baby Snatcher responsible for so many inexplicable infant deaths loomed larger in local consciousness (was more “mythic”) than Christ’s parable about a wayward, absentee son. Yet in India the Hindu stories of the Bhagavad-Gita and Mahabharata still resonate with many local folk. The pulse of a community’s needs is best taken by local participants. They may also know the best theatrical means for addressing these needs.

Once a local need is identified, it’s wise to consult about who will be the target audience. Will they be youth, parents, children or a cross-section of the entire population? Are they of a mixed cultural background? Do they all understand the same language? Are they facing a common social challenge? How might we best move and inspire this particular group?

Consultation then leads to a sharing of the participants’ abilities, talents and skills. The facilitator — or chairperson — can remind the group that everybody has something to offer, and then ask in what ways each would like to help. It’s good to remind everyone that many kinds of help are needed that do not pertain to performing. Skills such as sewing, sign making, carpentry, puppetry and painting might prove just as valuable as talents like juggling, singing, doing magic, being funny, or making music and sound effects. Indeed, specific skills of a group often dictate the format of their production. Sometimes the best ideas for plays come from the group’s specific talents and skills — and even their own experiences. Well in the Woods is a teen drama about transforming suffering into strength — based on the four youth performers’ own experiences. However, one of the members of this cast was shy about acting. But he had acrobatic skills and was very muscular. So we created a role around his talents and appearance. He played a baby. Wearing a diaper and a bow in his hair, while doing somersaults and cartwheels, this overgrown, muscular baby became an audience favorite. So rather than having expectations of what theater should be, we should keep our eyes open to who and what is in front of us. At the University of Montana, I saw a student riding a 10-foot high unicycle. The next day I saw him juggling. I introduced myself to him. Some months later when I was asked to write a play for Montana’s International Wildlife Festival, I knew at once I wanted to write something around the unicyclist student. Even though he had never acted before, he became the title character in The Trickster. 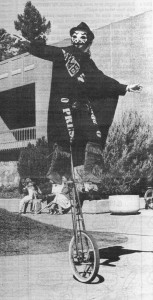 This two-faced unicyclist, wearing a double mask, acrobatically showed one face to loggers and another face to environmentalists, thus polarizing them. The Trickster’s coming into being serves as a good reminder that rather than focusing on a group’s limitations, if we see the abilities inherent in all participants, then not only does all the world become a stage, but all of us become playmakers.

“It is incumbent upon every man
of insight and understanding
to strive to translate
that which hath been written
into reality and action.” 2
— Bahá’u’lláh